The international dairy sector in recent years has generated a positive expectation in the sense that Argentina can play a role of growing importance in the global dairy market, provided it is able to sustain production levels and growth rates compatible with it´s potential, enabling it to adequately serve the domestic market and expanding foreign demand.

Major international reports have been mentioning Argentina as an emerging dairy competitor due to competitive production costs, mature production and industrial structures and is seen expanding beyond its traditional markets. They consider the country as one of the few in the world with genuine conditions to grow and leverage the context of the increasing demand for dairy.

In the Table below we compare the main resources available for the outstanding export countries explaining the potential for milk production:

Note: Prepared with data from World Bank, OECD and FAO. Arable land includes suitable for annual crops (corn, wheat, soybeans, etc. as well as pasture). The production capacity of Cereal strongly influence production costs being the feed item, with over 60% of total direct costs, the most important feature of the dairy economy. 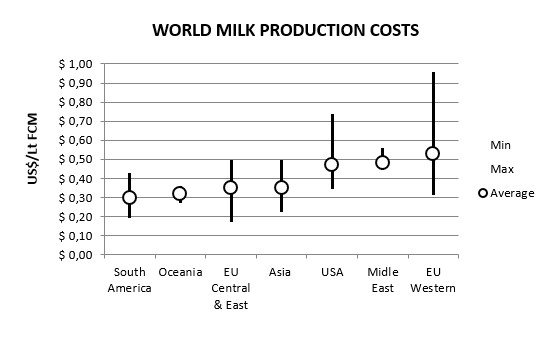