The dairy world is witnessing in recent years a paradigm shift, in which the prevalence of a milk supply fueled by the policies generated by distorting subsidies, has mutated into a market dominated by sensitivety to market signals and demand scenario governed by consumers desires.

The total volume traded internationally represents 7% of the total milk produced, being milk powder (whole and skim) with 55% of the volume, the main export; followed by cheese (28%) and fat (17%). In the long term (2014-2024) global output growth es estimated to be of 2% per year, arriving to a total supply of 1,000 million tonnes. It is estimated that demand will grow in the same period by almost 30% (equivalent to 20 million tons per year) and the proportion marketed internationally will grow from 7% to 10%.

Due to its strong economic growth (population growth, higher incomes and urbanization), China has become the largest importer of milk in the world, pulling demand and prices. Despite China’s political determination to increase local milk production (the chinese dairy producer obtains prices significantly above the international average of milk), the chinese consumer privileges the quality of foreign dairy products, reason that has been pushing consumption of dairy products, with powder milk and whey accounting for over 50% of total imports . The changes in the local economy structure shifting from an industrial to a consumer-based economy disrupted the dairy import trend in 2015, but has regained it´s growing level rally. 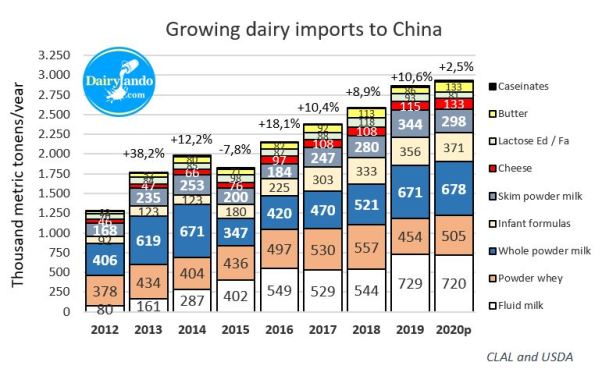 The slowdown in 2015 and initial recovering during 2016-2020 (driven by butter and cheese prices) of the growing global demand for dairy prices is plotted in the following figure: 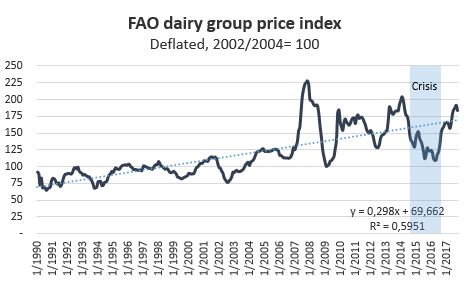